Tribes such as the Bapedi, BaVenda and Sotho and others start moving into the area south of the Limpopo and displace the San people. The era is rich in oral history and leaders such as Queen Shalati and Modjaji the Rain Queen hold sway over the Lowveld and surrounding areas, giving their names to geographical features such as the Selati River.

Portuguese explorers establish a fort and provisioning station at Delagoa Bay, now Maputo in Mozambique. They conduct trade in ivory and other goods with tribes from the interior.  The station is later annexed by the Dutch and travellers are drawn inland to the lowveld by the lure of legendary goldfields in the interior. However, they are plagued by disease and hostile local tribesmen.

Gold is discovered in the Leydsdorp area. A minor Gold Rush ensues and by 1893 the town is home to over 1000 inhabitants and boasts 214 listed claims. Malaria and other diseases decimate the population. Eventually the Leydsdorp cemetery is bigger than the town, and the discovery of gold on the Witwatersrand attracts the miners to less fatal and richer prospects.

Independent transport operators traverse the Lowveld, supplying the miners on the Barbeton, Pilgrims Rest, and Leydsdorp gold fields and moving goods between the goldfields and Delagoa Bay. Among these operators is Hugh Lanion Hall, a good friend of Sir Percy Fitzpatrick, author of the South African classic Jock of the Bushveld (1907).

At this stage, the Lowveld is part of the ZAR (Zuid Afrikaanse Republiek) under the leadership of President Paul Kruger. Unclaimed and uninhabited land in the Republiek is delineated as Crown Land belonging to the government. Selati is open veld populated by wild game and miners who operate claims leased from the government for minimum annual sums. Remnants of these claims can be seen in abandoned and overgrown diggings on the reserve, but many miners use the claims as their bushveld base for winter hunting forays.

A Malaria Research Station is established in Tzaneen by Dr Siegfried Annecke. Proper measures begin to be put in place to control and manage the transmission and treatment of Malaria. This opens the way for the establishment of permanent settlements in the Lowveld as opposed to the land being seen primarily for winter cattle grazing and hunting.

A Malaria Research Station is established in Tzaneen by Dr Siegfried Annecke. Proper measures begin to be put in place to control and manage the transmission and treatment of Malaria. This opens the way for the establishment of permanent settlements in the Lowveld as opposed to the land being seen primarily for winter cattle grazing and hunting.

L. Hall leases a parcel of land on the Selati River from the Crown and establishes a cattle farming operation on Ermelo Ranch.

Land is released by the Crown for individual purchase and H.L. Hall and Sons seize the opportunity to purchase the farms Huja, Hoed, Koedoesrand, and Arundel, which sits south of the Selati River, from the British Government for the sum of 3234 pounds, 2 shillings and 9 pennies.

By the early 1990’s, low beef prices and drought are beginning to take their toll on the profitability of cattle farming. In addition, the rising popularity of private game reserves and a growing public interest in conservation in South Africa begins to shift the focus of local farmers. 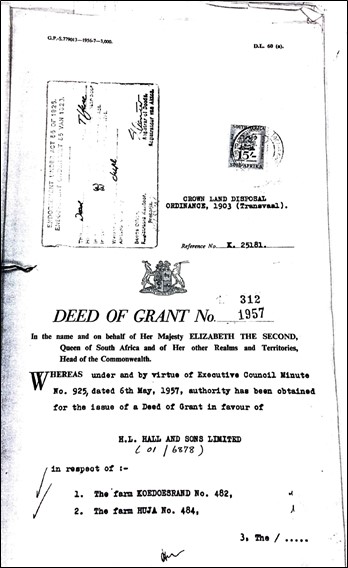 Dr Rob Snaddon, the great grandson of H.L. Hall and the Managing Director of H.L. Hall and Son at the time, calls a meeting of the farmers to the north and south of the Selati River at the JCI Recreation Club near Gravelotte. The owners of these farms represent a total of 55000 ha of land and the object of the meeting is to gauge the appetite of the individual owners to work towards combining their farms to establish a wilderness reserve for the conservation and protection of fauna and flora on their land.

At the meeting, Rob Snaddon obtains the support of the majority of the landowners and for 18 months further meetings are held at which legal formalities and guiding principles are debated in a bid to bring the project to fruition. The original name of the reserve, while under discussion and development, was “the Triangle Game Company”.  The operational entity of the Reserve at that stage was referred to as Game Co. 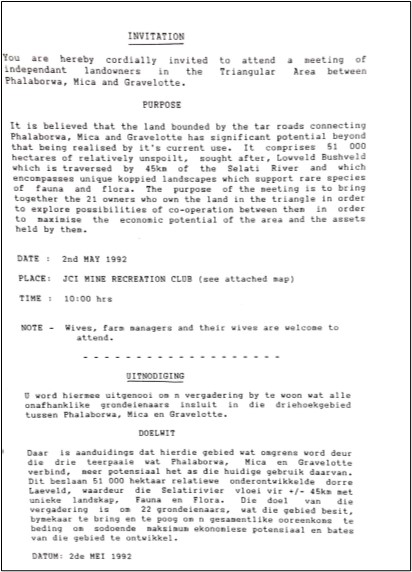 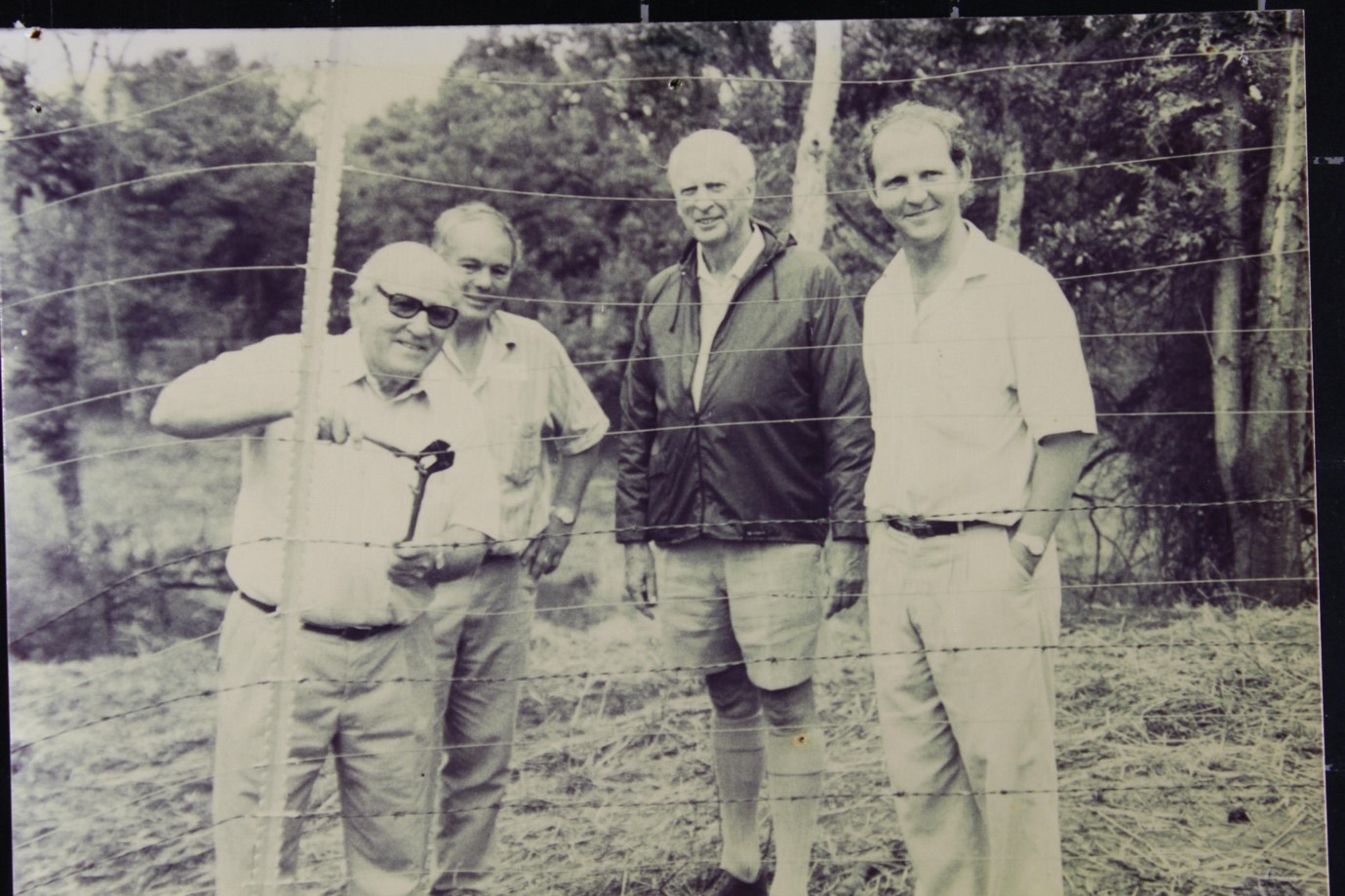 A launch function formally proclaiming the establishment of the Selati Game Reserve is held at Henry Dunn’s camp, Willie, on the Selati River. Seven founder members, including current members Hall and Sons, Piet Warren, Henry Dunn, the Thomas brothers, and Piet Mare, sign the Constitution and shareholders’ agreements, formally bringing the reserve into existence. To mark this momentous occasion, the fence between the Willie and Arundel farms is ceremoniously cut by Bob Snaddon, Rob’s father and the previous MD of Hall and sons.

First general manager of Selati, Andre Scholtz, begins the work of removing fences and existing infrastructure on the individual farms. Additional white rhino and other game species are acquired from surrounding farms and the Kruger National Park (KNP).

At this stage the name of the Reserve is officially changed to The Selati Game Reserve and the managing entity of the reserve is registered as the Big Five Game Company.

Andre Scholtz initiates the Selati sable breeding program with the assistance of Piet Warren, who takes over the project and uses his unprecedented expertise uplift it, allowing Selati to utilize the income derived from the program to expand and upgrade for the next 20 years. This enables Selati to run the reserve without having to resort to commerciality. The land, therefore, continues to thrive as a true wilderness area.

Jan Fourie purchases the farm BVB from Frans Smit, who had been one of the original 7 signatories of the constitution.

The farm Danie is purchased from Llewellyn Labuschagne by a consortium of Selati landowners. Danie was surrounded by land belonging to Selati members, but was not part of the reserve at this stage. Danie is incorporated into the reserve and subdivided into 2 potions which are sold to Junior Joubert and Poen du Plessis. Junior’s portion of Danie is referred to as La Belle France.

61 Elephants brought onto Selati from Kruger. The groups settle well and are soon an integral part of the reserve. 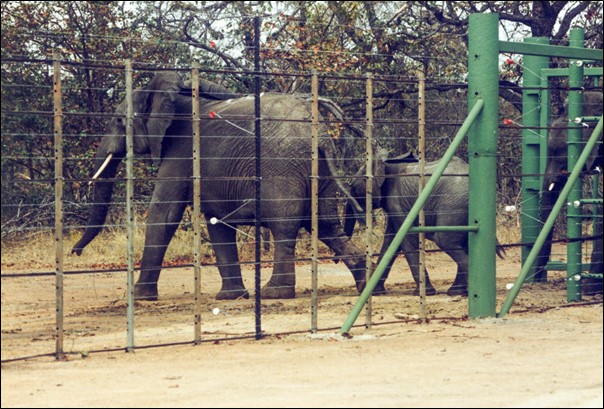 First Elephants released into the boma – 1996

Ian and Elsa Bester are appointed as general and administrative managers of the Reserve.

A small pride of lions, 3 males and 3 females, are introduced to Selati. There had been free ranging lions on the reserve since its inception, but landowners were divided when talk of bringing a permanent pride onto the reserve began. A vote is taken by the members and the pro-lion camp wins by one vote.

Selati becomes one of the first reserves to receive Black Rhino from Ezemvelo KZN Wildlife in a custodianship agreement facilitated by the Black Rhino Range Expansion Project under the auspices of Dr Jaques Flammand. This program is sponsored by the World Wildlife Foundation (WWF). 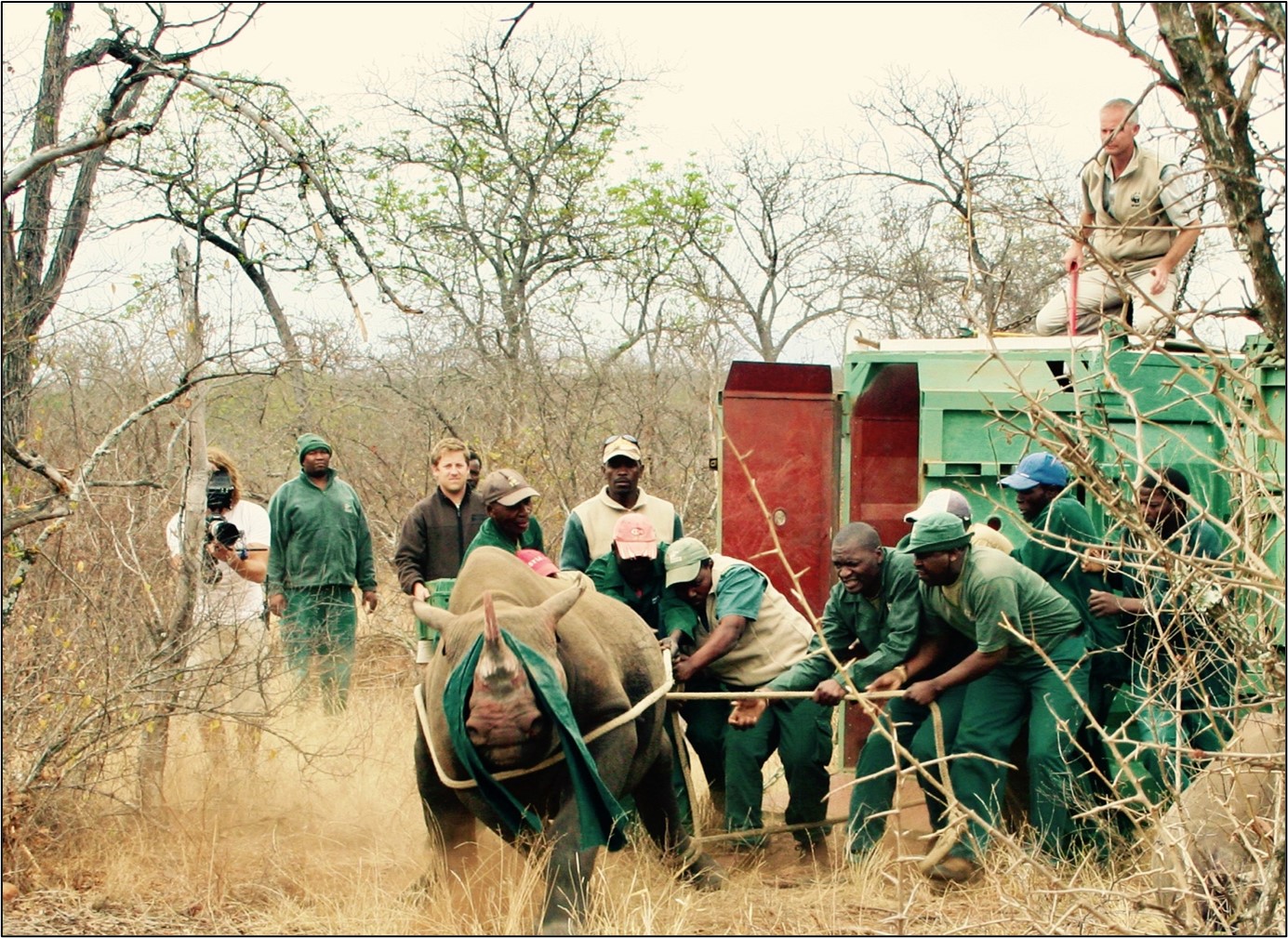 The scourge of rhino poaching becomes a threat to the survival of rhino, both black and white. Selati operates a sophisticated antipoaching operation in collaboration with associated reserves in order to counteract the extinction of this species at the hands of unscrupulous individuals and organisations pandering to the demand for rhino horn products from predominantly Asian markets.

The elephant population on Selati is increasing to an extent that the control of their numbers is beginning to become integral to the maintenance of the reserve’s biodiversity. To this end, a groundbreaking elephant vasectomisation program, sponsored by prominent international conservation and veterinary organisations, including Disney and San Diego Zoo, is undertaken on Selati. 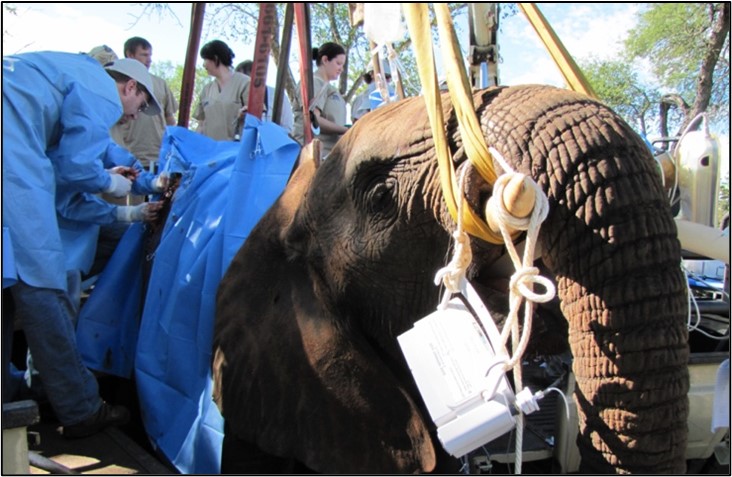 Dusty and Lourette Joubert are appointed as general and administrative managers of the reserve.

Prices of sable antelope and other live game begin to decline.  This source of income, which has sustained the Reserve for over 20 years, begins to dwindle. The Selati board and managers begin to look at other opportunities to raise revenue to support the running of the reserve. Volunteer programs and research programs are instituted, and a tented camp is built at HQ to house these teams.

Formation of the Selati Non-Profit Company, the Selati Wilderness Foundation. This entity is aimed at raising funds to further conservation efforts on the reserve, at subsidizing antipoaching activities, and to offer support to local communities.

Commercialisation opportunities are offered to individual owners as a means of generating income for the reserve. Several camps begin the process of creating tourism initiatives on the Reserve.

Permission to introduce buffalo onto Selati is received from State Veterinary authorities. Selati had, since its inception, attempted to add this species to the reserve but was prevented from doing so by veterinary regulations pertaining to the control of foot and mouth disease and bovine tuberculosis. In April of 2020, while the Covid 19 pandemic while sweeping the globe, the Selati members locked down on the reserve were privileged to observe the release of a breeding herd of 28 certified disease-free buffalo under veterinary supervision.

An elephant immunocontraception program is implemented on the reserve in order to limit the population growth of these animals. This humane and ethical program, which has proven  to be successful on over 20 other reserves in South Africa, is sponsored by donors to the Selati NPC and Saving the Survivors, an organization headed  by veterinarian, Dr Johan Marais.

Bryan Havemann and Lindsey Jones appointed as general and administrative managers of the reserve. 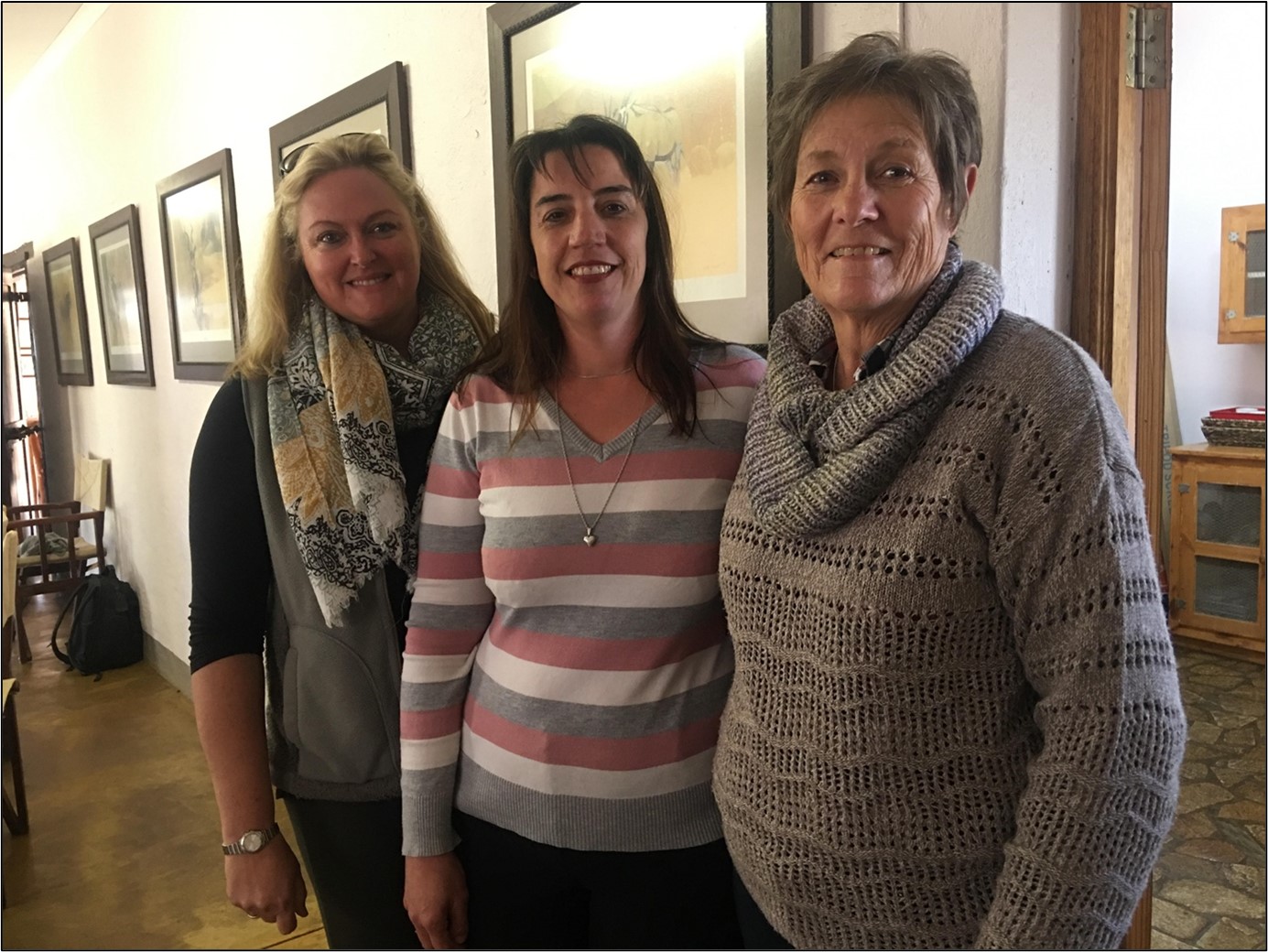 The Wood family purchases a portion of Farrel and become the newest members of the Selati Game Reserve.